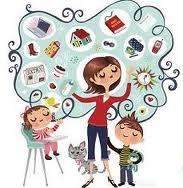 Every mother has had one of those moments:  the kind where your child informs you at 10pm that two dozen cupcakes are needed at school the next day.  Or that a must-be-a-long-sleeved-crisp-white shirt is needed for the holiday concert in an hour.  Or that a kick-ass present is required for the sleepover that suddenly turned into a birthday party (that you’re already en route to).

Had me one of those moments this week, in the form of Third Grade International Day.  Sure, I saw the paper come home requesting culinary delights of the United Nations.  As is typical, I quickly scanned it, decided it was a no-go, and did what every other mom would do (okay, maybe not every but definitely my real friends).   Anyway, when my son asked if he could bring something in denoting our heritage he got my best “Hmmm, we’ll see” response, which of course in parenting always translates to “I hope you’ll forget about this notice as fast as I’ve tossed it.”

Curiously, what his eight-year-old ears heard was something along the lines of “Sure, I’m certain if I can find a Greek cooking class in the next three days I’ll be able to bring a killer baklava.”  As if.

The matter was quickly dismissed.  By me.  Alone.  Of course it was.

The following week he came bounding off the bus with excited stories of pierogies and sour cream sticks and other exotic foods he’d tasted that day.  What?  Oh, right, International Day.  “So what am I bringing in tomorrow?” he asked, eyes shining.

Karma being the hilarity it typically is, it was one of those moments in one of those weeks:  I had not even a single egg in the house.  Actually, I was sorta looking forward to seeing which kid would be the victor in the showdown of the final bowl of milk for their cereal dinner.   Yep.  It was the dreaded Food Shopping Eve, the night where resilient families find out just how long a sleeve of Ritz crackers will sustain them.

I had nothing and there was no reasoning with him.  He didn’t want to hear about exhaustion, or coupons for the next day’s sale items, or even the slightly lame excuse that – internationally speaking – we were kind of a mutt, so each nationality pretty much canceled the others out.

Here’s where creativity saves you.

I reasoned that the best way of classifying our Greek-Puerto-Rican-German-Italian-and-Irish heritage was to simply go with an All-American dish.

“Brownies?” his tears began drying and I detected a slight smile.

No.  Sorry babe, no eggs. Not until tomorrow.

“Tacos?” he lifted one brow.  (Funny that he’d think a house without eggs might in fact have beef, cheese and produce at its disposal. Funnier that he sees tacos as All-American.  I like the way this kid thinks….)

“Better than that,” I winked.

So the next morning he woke early to help me pop open a lone tube of biscuits.  We masterfully rolled and twisted them around the hot dogs we’d sliced into skinny pieces.

Together we concocted the most awesomely amazing All-American-Pigs-in-Blankets that third grade class had ever seen.

They were devoured before the Pledge of Allegiance.

I know the school year’s winding down but I am really going to start paying better attention to letters from school.  Next year.  Really, I promise.

and catch her tweets:  www.twitter.com/eyerollingmom

1 thought on “Because Everybody Loves American Pigs”

I am a mom, a wife, a writer, a blogger & (most important) a Former-Reality-TV-Star. Really. You can Google it. I've been featured in Huff Post a couple of times (https://www.huffpost.com/entry/empty-nest-syndrome-kids_n_62bad8a9e4b080fb670a224b) and (https://www.huffpost.com/entry/lose-friends-new-years-resolution_n_61b79733e4b00aca716a69cc) and was in the inaugural cast of "Listen To Your Mother, Boston" sharing my original essay, "The Thinking Girl's Thong." I was featured in NPR’s “This I Believe” radio series yet I'd say “Most Popular 1984” is pretty high on my list of achievements (next would be that home improvement reality TV show of 2003 but my kids forbid me to talk about it anymore). I would leave my husband for Jon Stewart, either Hemsworth brother or Sawyer from "Lost" and he is well aware of it (my husband ... not Sawyer.) I am happiest writing and raising four kids (now young adults) yet I'd trade any or all of them for great shoes. I drink WAY too much wine if the music is awesome ... I spend WAY too much time watching, listening & absorbing true-crime ... & I still have a bestie from fifth grade. I make sure my daughter knows: that is a beautiful thing. Fave published pieces include "Little Baby Fug," "The Thinking Girl's Thong" and "Friendvy." My collection of essays, A Momoir, is a work in progress and various chapters are posted -- agent interest is welcomed!