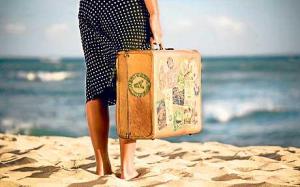 Just visited Cancun for the first time this summer.  Couple of friends, no kids and unlimited food and booze.  As a bonus, a mildly-middle-aged (or, in-denial-about-it) gal like myself can feel pretty good about herself lounging around a pool with a bunch of confident  Europeans, known globally for letting it all hang out.  It was a rather delightful self-esteem boost.

A not so delightful self esteem boost:  going out to a club one night.  Clearly this decision should have been filed under “what were we thinking” the minute we found out the van was departing our resort for the club at 11:30.  That’s pm.  Still, we threw our shoulders back and crammed into that un-air-conditioned death mobile with reckless abandon. (”We’ll sleep when we’re dead!” became our vacation mantra.)

After our eyes adjusted to the strobes, we made our way single-file (connected, chain-gang-like) past hordes of gyrating, thrusting, heaving, puking, sobbing, screeching teenagers (ahh…right…the drinking age is eighteen in Mexico).  We huddled together in our resort-appointed table and stared.  It was like an MTV marathon without commercials.  I made the decision right there that my children would never, ever visit Cancun (or any other Caribbean island) until their honeymoons  (Natallee Holloway anyone?  Yeah, STILL freaks me out…).

We left before the wet-tee-shirt contest concluded, making our way to the exit past the authentic boxing ring that had been brought in for it.  We’d heard that this club’s big finale culminated with the roof opening and “rain” pouring onto the dance floor.  Excellent.  Wet-tee-shirts for everyone.

No thanks, we were done.  We were going to get our mildly-middle-aged-or-in-denial-about-it asses back to bed because we had a big day starting in a few hours.

Tina Drakakis blogs at Eyerollingmom and was just featured in the Boston production of “Listen to Your Mother: Giving Motherhood a Microphone.” Her work has been featured in NPR’s “This I Believe” radio series yet she places “Most Popular 1984” on top of her list of achievements.  (Next would be the home improvement reality TV show of 2003 but her kids won’t let her talk about that anymore).   A witty mother of four, she takes on cyberspace as @Eyerollingmom on Twitter and Eyerollingmom on Facebook. –

I am a mom, a wife, a writer, a blogger & (most important) a Former-Reality-TV-Star. Really. You can Google it. I've been featured in Huff Post a couple of times (https://www.huffpost.com/entry/empty-nest-syndrome-kids_n_62bad8a9e4b080fb670a224b) and (https://www.huffpost.com/entry/lose-friends-new-years-resolution_n_61b79733e4b00aca716a69cc) and was in the inaugural cast of "Listen To Your Mother, Boston" sharing my original essay, "The Thinking Girl's Thong." I was featured in NPR’s “This I Believe” radio series yet I'd say “Most Popular 1984” is pretty high on my list of achievements (next would be that home improvement reality TV show of 2003 but my kids forbid me to talk about it anymore). I would leave my husband for Jon Stewart, either Hemsworth brother or Sawyer from "Lost" and he is well aware of it (my husband ... not Sawyer.) I am happiest writing and raising four kids (now young adults) yet I'd trade any or all of them for great shoes. I drink WAY too much wine if the music is awesome ... I spend WAY too much time watching, listening & absorbing true-crime ... & I still have a bestie from fifth grade. I make sure my daughter knows: that is a beautiful thing. Fave published pieces include "Little Baby Fug," "The Thinking Girl's Thong" and "Friendvy." My collection of essays, A Momoir, is a work in progress and various chapters are posted -- agent interest is welcomed!