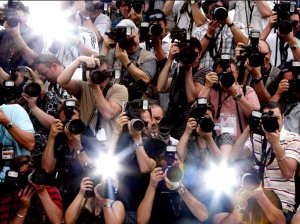 My friend Linda posted a photo a while back.  In the picture was her cousin with his lifelong best friend – who just happens to be David Axelrod (Barack Obama’s senior advisor at the time) — and well, Obama.  They all attended the Bulls/Wizards game one night.  Her cousin toured the White House, saw the oval office (smaller than people imagine, and — did we know —  Obama uses JKF’s old desk?),  and then joked and chewed the fat with the Prez at the basketball game like it was no big deal.   He said the entire night was electric — when Obama walked into the arena it sounded like a rock concert.

Best friends with the president’s senior advisor.  Now THAT is cool.

I looove the friend-of-a-friend connection.   My husband’s buddy’s brother was in Animotion, that one-hit-wonder band of the 80s.  Today, every time “(you are an) Obsession” comes on, my kids will crack up and shout “Hey, it’s Jerry’s brother!”  (Of course my kids know 80s iconic music.  If yours do not ….  tsk, tsk ….)

My former boss had two sons who grew up with Jerry O’Connell, the chunky little kid from “Stand by Me” who is now a hunky TV and B-movie star.  She told wonderful stories all the time: Jerry grew up eating dinner at her house, getting in trouble with her boys and today they are all still friends.  I love that.  I know someone who knows Jerry O’Connell.  I’ve heard so many stories about him I feel like I know him, too.

My father always told us about the time he dated Rosemary Clooney.  As a kid it didn’t really register as anything fantastic but now I think, wow…. pretty cool.

My sister was once asked to dance by Chad Lowe — brother of Rob — in some college bar (the only thing I find remotely interesting about this – in an ironic kind of way — is that at this exact moment in time, hundreds of miles away – on my own college campus – I happened to have a poster up in my dorm room of the way hotter brother.)   Let’s not mince words:  he is still kinda hot.  I digress.

My brother-in-law will brag that he went to college with Meg Ryan (who was known as Peggy).   Oooh, what was she like?   Don’t know, never hung out with her.  Fizzle.  No points for that one.

Thankfully, together they’re raising children off to a WAY better start:  in his freshman year my nephew became friends with Evan Springsteen.  Of course I mean that one.   Please … my heart palpitates at merely the idea of crossing paths at some point in time.  I once received a very hushed and covert call from her.  In what was likely not as stealth as she’d imagined I heard her whisper (from her basement), “Evan Springsteen is eating … my … MEATBALLS!”  Props.  That totally redeems the Chad Lowe tale.

Here’s my one funny story:  In my early professional life I once had to spend some time with a (C-list) celebrity who was promoting her rather lame memoir —  a tell-all of her hidden struggle with alcoholism.  It was my first book convention, it was in Vegas, and well, I was really (really) young.

It was bad:  I’d gotten in from my night out only hours before her morning book signing.  I’m certain I still reeked and my head was spinning, but I made it through the signing.  I thought I was home free as I took my seat next to her at a luncheon but right in the middle of it she totally lost it.

She couldn’t take it anymore — in a diva-like moment, she furiously demanded that the dessert cake be sent back to the kitchen because she insisted she smelled liquor in it (“Ummm, no.., that would be …  your publicist…”).

I wanted to die.  I sat motionless as the restaurant staff was severely admonished.

I guess it’s probably best that I don’t know too many famous people because —  hello, — look where all my stories would end up….

and catch her tweets @eyerollingmom