I should have seen it coming.

I should have known.

I should have been prepared.

But why would I ever think the odds were going to tilt in favor of irony when Fate had been so kind to me before? I had tested her and tempted her on three separate occasions, and now fickle Fate was sending me a message: the well of good fortune had run dry and that was it.  We were done.

So my fourth baby came out, well, ugly.

He was tiny—for us—a scrawny eight pounds compared to his robust siblings, my smallest yet. My runt. I remember calling my bestie  Betsy and whispering into the phone from my hospital bed, “No… he’s really not like the others.” There was more surprise than shame in my voice, but it was okay; I could tell Betsy these things—we’re that close. Truth be told, she was the only one I did tell. We often joked that if either of us ever had an ugly baby, we’d be the kind of mother who knew it. None of this isn’t-he-beautiful-just-ignore-the-lazy-eye nonsense.   We had a clue. We would know. And so I knew.

“I’m sure it’s not so bad,” she soothed across the miles. But I could tell what she was really thinking: It’s about time, bitch.

She was right. My first three kids were beautiful. Not beautiful in the  “all kids are beautiful” sense of things but seriously, really beautiful. The kind of beauty that may very well garner them an extra day for a term paper. Or perhaps a cab right away. Or maybe an undeserved second interview. That kind of beauty.

I suppose it was bound to happen eventually, but boy, did I feel bad for this little guy. Everyone—everyone—notices the obviously ugly, the decidedly different sibling. They’re the stories of legends. The Cinderella stepsisters. The Ashlee Simpsons, racing to plastic surgeons to keep up with sexy sisters. The sad little Shaun Cassidys forced to belt out lame pop ditties just to measure up to teen idol brothers (who doesn’t shudder at “Da Doo Ron Ron”?) The Titos, Jermaines and La Toyas of the world. What about all those other Baldwin brothers? Anyone know any of their first names?

This baby was doomed.

“He looks just like the others!” my mother shrieked with delight. But I knew the deep, dark truth.

My oldest son, eight, was the epitome of Gap commercial cuteness. My daughter, six, was a sassy, stunning siren. My toddler, 18 months, sported delicious ringlets and smiled constantly. Was it any wonder that I’d become jaded by perfect jaw lines and bedazzled by blue eyes?

When firstborn arrived, naturally he was perfection personified (as all firstborn are). There is no scrutiny or comparison with a firstborn. Ever.

When second-born came, she was the prototype First Girl in the family. She could have been born with antlers and we’d have eaten her up all the same.

When third-born joined us I hadn’t held an infant in my arms for a stretch of four years, so it was like having a firstborn all over again (only with two little potty-trained elves running around helping me fetch things). It was bliss. Third-born could have been Rosemary’s Baby, but I was so thrilled to have him I never would’ve noticed.

This fourth time (my predetermined final time) when forced to look at three other adorable frames of reference, I noticed.

I’d been traveling a precarious road all along, waiting for the other shoe to drop because really, our family is an oddity. My husband and I absolutely should not have the kids we do. Really. My husband is Greek, Puerto Rican, Irish, geez… too many more to mention. I am Irish, German, Italian, a dash of Hungarian… you name it, and we’ve got it. We are the United Nations of genetics. Also, we are dark—and not exactly, er…shall I say, slight (visualize a chunky caricature of Gabby and Carlos from Desperate Housewives.) Yet all four spawn are miraculously light and—how about that irony again—remarkably thin. Our children turned out wrong by every account.

So I imagine it was time. I loved my littlest creation and held him tightly for his first two years as he cried and cried and cried. I’d silently question the sincerity of people when they’d remark how cute, or delightful, or lovely he was (clearly they were just being polite). And life went on. Fourth baby got toted around to school assemblies and soccer fields and play dates like all other youngest siblings—like a little piece of Samsonite.

Ah, but it turns out that Fate’s got a grand sense of humor.

Somehow, sometime, when I’d stopped paying attention, my littlest creation sort of fell into line. He became un-ugly. Today, many years into his happy little life he is as easy on the eyes as the others and (perhaps for greater irony) may very well be our standout swan.

Which makes me wonder: Was my ugly duckling actually an ugly duckling all along, from the beginning? Probably not, judging by his photos (which are naturally fewer than his siblings.  Naturally, tthis is okay; it is the documented rule of birth order). And did he cry as incessantly as I remember, or was I perhaps a bit more frazzled and older and less patient to handle him? Likely. More, was I just being judgmental and shamefully hard on him? Regretfully, yes. (Paging Joan Crawford?)

But, oh, that fickle Fate. It’s funny how she works. My perfect firstborn? He’s a teen right now and sure, he’s a hottie. But let’s just say if I had a dollar for every missed homework or incomplete assignment Boy Wonder tosses into the big black hole of his life, I’d be sitting pretty right now. He is clueless beyond reason, without a strand of street smarts running through his veins. His beauty was a tradeoff: I gave him life, and he gave me a facial tic. And stunning second-born royalty is still a stunner, but her sarcasm is insufferable at times, bound to repel unsuspecting nice boys. She is destined for spinsterhood in the future if she doesn’t watch it. Third-born’s luscious ringlets are long gone, but he’s still a looker, only the laziest child I’ve ever met. Presently he’s attempting to complete the fourth grade without lifting his head off his desk. I watch the three of them and thank my lucky stars they are blessed with good looks, because I fear they will desperately, sorely need the boost in life.

And that ugly little fourth-born? He’s having the sweetest revenge of all. Not only is he smart and respectful and motivated; he is, well,if I have to admit,  my sweetheart. A living doll, enjoyed and loved by all who meet him. I’m hoping he never knows my first impression of our first meeting until he’s old enough to laugh about it.  And I am financially able to cover his therapy costs.

My ultimate confession to Betsy has become a running joke that continues in our lives. For years following our private exchange, she remarked in wonder every time she saw him, “Ah, here he is, Baby Quasimodo.” Her eyes twinkle with sarcasm, but I can always detect the dig in my good friend’s voice: It figures, bitch. 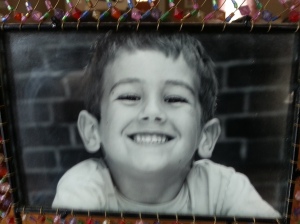